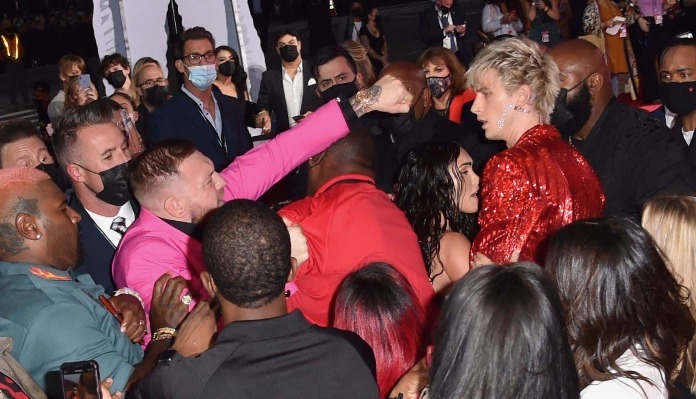 The online sportsbook Bovada released the opening odds for a McGregor vs. MGK fight after the two got into an altercation at the MTV VMAs. According to the opening odds, McGregor is a -5000 betting favorite to defeat MGK in a “celebrity boxing match.” Machine Gun Kelly, on the other hand, is a +1000 betting underdog. Check out the odds below.

Who would win in a fight: (Bovada)

The odds of a McGregor vs. Machine Gun Kelly fight actually happening are very low, for a number of reasons, not least the which being that MGK is not a professional fighter. While other celebrities such as Jake Paul have taken to the world of combat sports in recent years and have done well, it still seems like a bit of a stretch to suggest that MGK would even have a puncher’s chance in a fight against McGregor. There is a reason the bookies opened up McGregor as such a huge favorite for a potential fight against MGK, after all.

Having said that, considering the way that combat sports are going with so many celebrities jumping into the world of boxing, it’s certainly possible that we could see McGregor head back into the world of boxing and take on some of these big names in the future. If that’s the case, though, one would think that McGregor would pursue a fight with someone such as Paul who is a proven draw and a proven fighter, rather than against someone like MGK.

Who would your money be on in a potential celebrity boxing match between Conor McGregor and Machine Gun Kelly?

This article appeared first on BJPENN.COM